Your application created in Altova RecordsManager can be comprised of one or more repositories, each of which includes multiple data containers.

All configuration is done via a straightforward visual interface. No coding or backend database development is required. What’s more, you can reconfigure the repositories, add new forms, change settings, and carry out other administration tasks even after users have started working with the system. Any admin changes you make will be reflected on the user side as soon as the user interacts with the system.

As you set out to configure the structure of the data stored in your app, the sequence is roughly that shown below, though RecordsManager is flexible and new items can be added at any phase of the design process.

1. Create repository(s) and data containers, and set up a hierarchy
2. Configure fields
3. Configure forms
4. Configure filters
5. Design the home page for your app 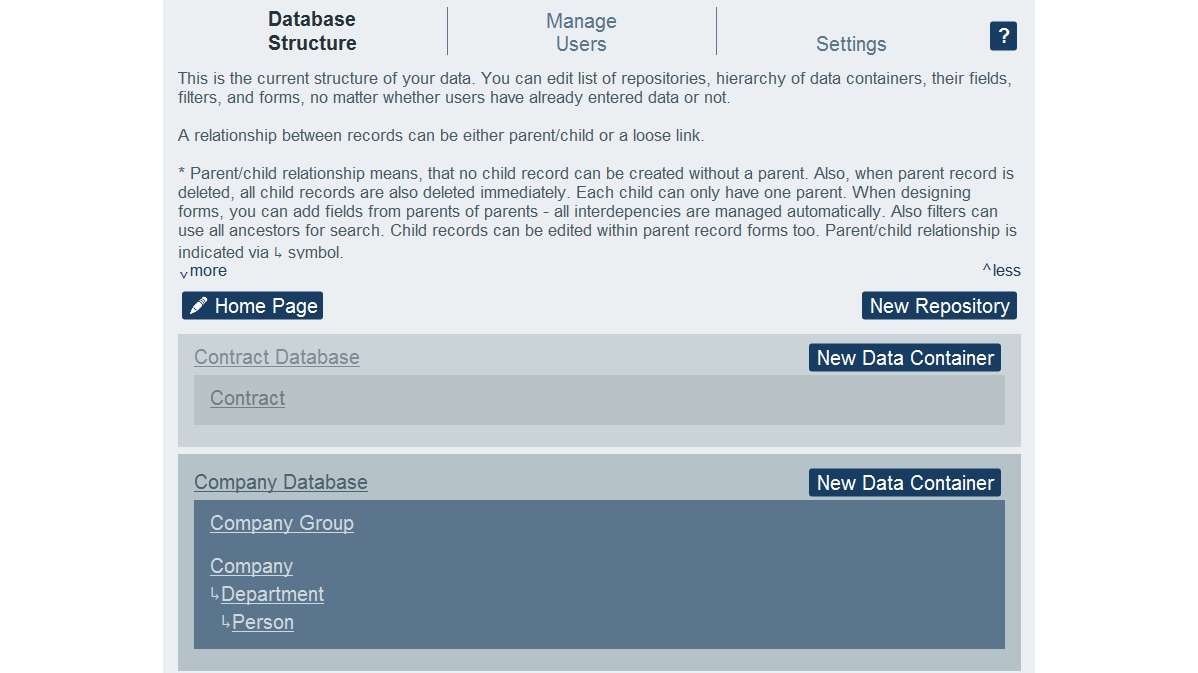 You can apply different color themes to each repository for clear differentiation, as shown above with the Contact and Company repositories.

Because you can change the structure of your database and its data containers at any time, even after data has been entered, database checkpoints are an important fail-safe. These allow you to make a complete copy of the whole database including the structure, access configurations, and user data. When used as a safety precaution before making important structural changes, you can restore the whole database to the last-known-good checkpoint with a single click.

The system comes with multiple built-in color themes that you can choose to style your app. Then, each repository that’s part of the system can use a different variation on that theme, if desired. What’s more, users can customize the app themselves by changing the color theme as desired while working.

You as admin can easily customize the font size, require field titles to be all capital or low/camel case, apply bold and italic styling to certain fields, and so on. End users can still adjust the overall font size to optimize viewing in their browser or mobile device without sacrificing the form design provided by the admin. 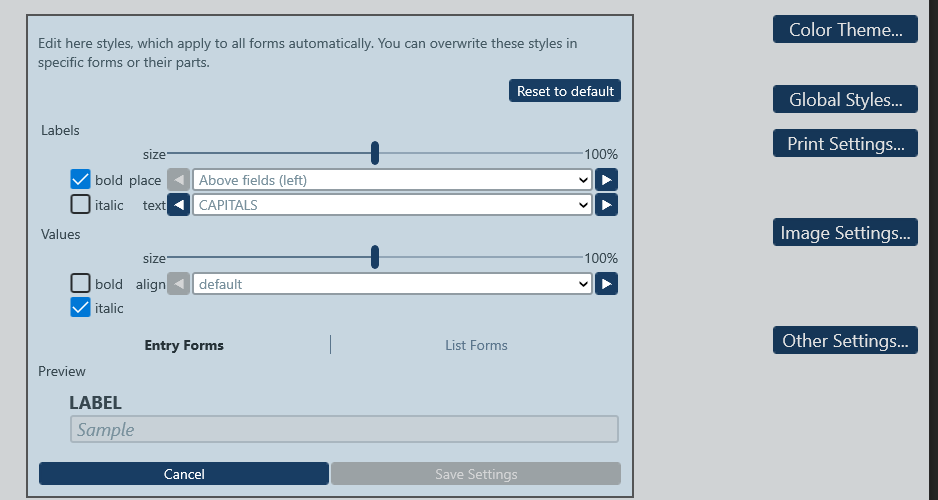 There is an additional setting for size translation when the forms are used for printing.

RecordsManager supports an image library so that you can use images throughout the design. One of these images can be designated as a company or app logo, which will be displayed on all main pages in the system.

Data containers are similar to tables in SQL databases in that they consist of records with fields. However, unlike SQL tables, data containers in RecordsManager give you the flexibility to add, remove, change, and/or re-order fields at any time.

Within each repository, you can add as many data containers as you like.

Each data container is defined by a set of fields, in which the data of records is stored. Shown below are fields defined for a Department data container.

Parent-child definitions are considered strong links since a child is created from a parent and cannot be created without the parent. A parent container can have multiple child data containers. A child, however, can have only one parent container. The following consequences of the parent–child relationship should be noted:

In the view below, a parent-child relationship exists between the company, department, and person fields.

A second type of relationship is a link that is created between two independent data containers. These loose links enable records to be created independently and without reference to each other. The links are manually created during configuration. A single record can thus have multiple loose links to other records. If one record of a loosely linked pair is deleted, the other record is not affected.

In the view above, Company Group and Company are loosely linked.

Loose links can be set in the following ways:

Links in RecordsManager are extremely flexible. The administrator can change between both types of relationships – even if data has already been entered. The system will create the new data structure as closely as possible and existing forms will be adapted accordingly. 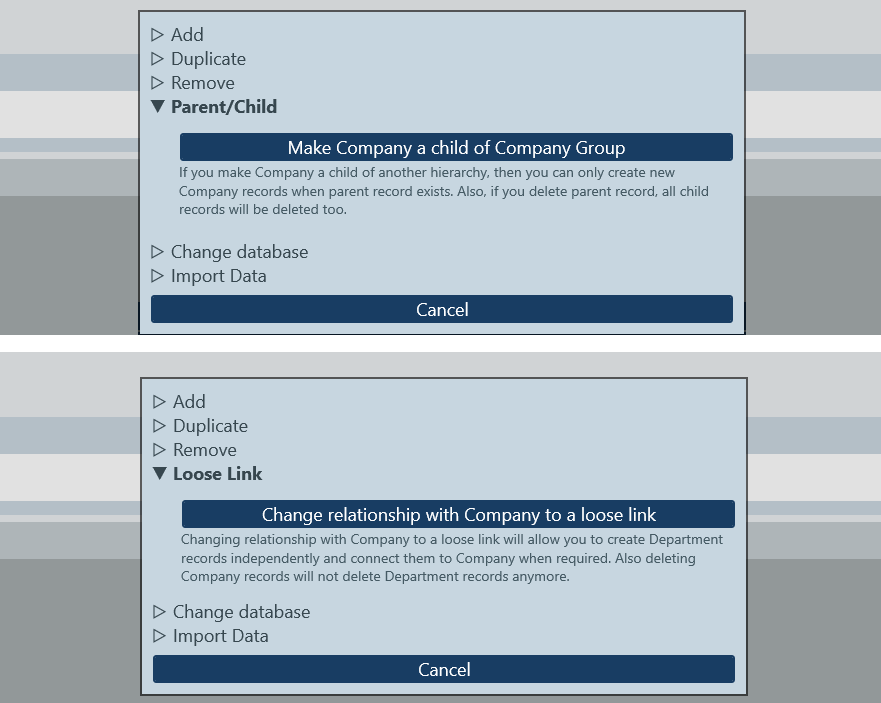 You can either define a data container from scratch, duplicate an existing container as a starting point, or import existing data.

It’s also possible to perform a mass update of existing records to modify fields via XPath, either with a fixed value or based on other fields. You can update all records or preselect some records using a previously defined filter. During the update, you can preview changes that will be made before actually running the mass update.

After visually defining your repository and container hierarchy, create some fields for your data containers.