Originally coined by analyst firm Gartner, RMAD (rapid mobile application development) isn’t just the biggest acronym in app development for 2019 –  it’s an absolute necessity.  Waiting six to eight months for an app ensures that it will be completely obsolete once it’s finally ready for prime time: requirements will change, another app will fill the niche, or end users will already be entrenched with another solution.

In addition, a traditional, non-RMAD approach assumes you have a team of mobile developers ready to tackle the project, and for many businesses, hiring experienced app developers is a lengthy, expensive process. Outsourcing your app development work that well, either. Many have tried, but few have succeeded in getting third-parties to realize the original vision of the app, on time, and while ensuring the integrity of their intellectual property rights.

Luckily, with the increasing prevalence of RMAD tools, developing a sophisticated, full-featured app in a week or two – and with your existing tech team – is suddenly a reality. Of course, not all RMAD tools are created equal. Let’s take a look at the five top requirements you should demand in an RMAD solution.

According to Gartner’s Market Guide for RMAD Tools, “the growth of the RMAD market shows the pent-up demand for ‘coding-optional’ tools to build apps quickly and cost-effectively.” Unfortunately, there’s a great degree of variance in the market in terms of what can be achieved with such “low code” tools. Customers should be wary of solutions that promise quick fixes without the sophistication end users demand.

RMAD tools that deliver the best of both worlds – fast, easy app development, plus full-featured, slick apps that will delight users – share the following five characteristics:

Let’s take a look at one framework designed for rapid mobile development.

Altova MobileTogether takes a unique approach to RMAD by giving you the best of both worlds: low-code UI and control-flow design, plus the full flexibility of a functional programming language for selecting and manipulating data.

At the same time, it utilizes the full flexibility of XPath/XQuery as a functional programming language for data manipulation. MobileTogether Designer includes a powerful expression builder and evaluator to help users who aren’t already familiar with those languages. In other words, you do not have to have mobile development experience to build an app in MobileTogether.

This approach allows firms of all sizes to build apps not only in record time, but, more importantly, with the functionality and sophistication they need to be effective, to capitalize on the benefits promised by the RMAD concept.

Apps for All Platforms

So how does it work? After developing your single app design in MobileTogether Designer, you can choose to deploy your app instantly to iOS, Android, and Windows users, or allow MobileTogether to generate code for native apps that you can then compile and submit to the respective app stores.

OK, let’s circle back to the five requirements for RMAD tools above, specifically as they apply to the MobileTogether framework: 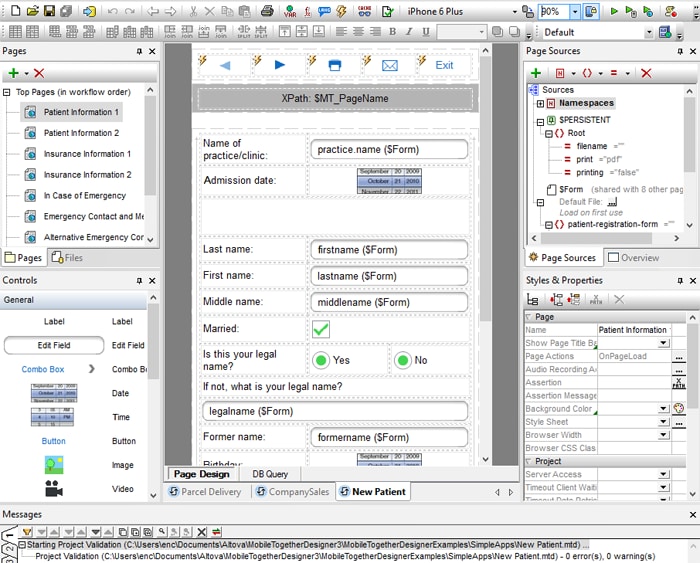 Since the MobileTogether app is free, employees can access the same solutions on their phone, tablet, PC, or all three – at any time. Instant Deployment ensures that enterprise customers have their app in 2-5 days, and any subsequent app modifications are available to end users instantly.