Altova products have long been recognized for their rich, intuitive user interface. One example is the UModel diagram window, which includes multiple display options for class diagrams to facilitate ease of use and improve information clarity in objected-oriented models. Class diagram style for projects that generate .NET (C# and Visual Basic) application code UModel 2011 Release 3 includes a new option for displaying class diagrams for .NET programmers. If your project will generate source code in .NET programming languages (C# or Visual Basic), your classes may contain .NET properties that can be called from outside like attributes, but are implemented internally as methods. To better organize .NET classes, UModel offers an option to display .NET properties and methods in separate operations compartments inside classes. 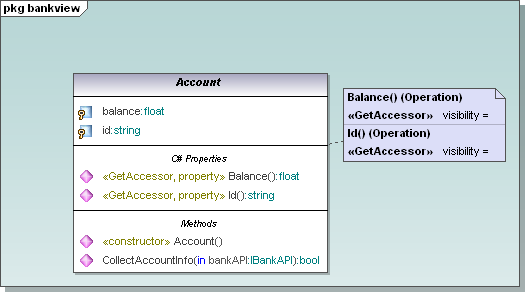 This view is an optional setting in the Styles helper window for class diagram display and editing. Choosing to display separate .NET properties compartments or a single traditional UML operations compartment has no influence on code generated from the class.

This feature lets users simplify the diagram to focus on the properties and operations relevant to the task at hand. Hidden items are indicated by ellipses.

Clicking on an ellipsis re-opens the Visible elements dialog. Options for Interface Notation UModel 2011 supports alternate diagram styles for interfaces between classes. By default, new interfaces are created in class diagram style with arrowhead styles and notations to indicate the interface creator and interface users. In the class diagram below, the developer wants to concentrate on class relationships and interfaces, so all the properties and operations compartments are collapsed.

Interfaces have a special Toggle Notation quick-editing button to switch from the class diagram style to the UML ball and socket interface notation.

Visibility Icons vs. Mathematical Operators The UModel visibility icons, along with the visibility pull-down menus in the drawing window and properties menu, have been praised because they avoid confusion with common mathematical operators that can also appear in definitions of properties and operations. But users who prefer the traditional view can choose UML Style in the Project Styles helper window. 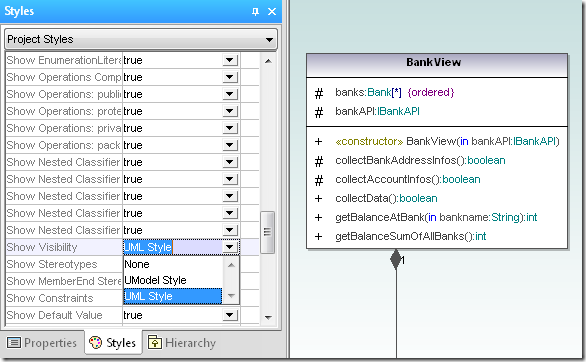 All the style settings selected to display class diagrams on screen are also applied when rendering project documentation in Word, RTF, or .html formats Find out for yourself how you can improve development of your object-oriented application by customizing the display of class diagrams with Altova UModel – download a free 30-day trial today!

The Industry Has Spoken… For us at Altova, being recognized by our industry peers is an honor and something we are proud of and want to share with all of you – our current and future customers. This summer Altova was named to both the 2009 SD Times 100 and Visual Studio Magazine Readers’ Choice Awards.

Altova, creator of XMLSpy and other leading XML, data management, UML, and Web services tools, today announced the availability of Version 2008 (v2008) of its award-winning line of software development tools. With the release of its v2008 products, Altova introduces a host of powerful new capabilities, including support for the Widows Vista operating system across the product line, extended support for Office Open XML file formats in XMLSpy, more data mapping versatility in MapForce, and enhanced database functionality in StyleVision. Additionally, this new software version brings Visual Basic .NET code engineering and real-time integration with Visual Studio and Eclipse in UModel, support for editing database views and stored procedures in DatabaseSpy, one-click directory synchronization in DiffDog, and much more.