XQuery Update Facility is an extension of the XQuery language that allows you to make changes in an XML instance using “update expressions” that insert, delete, replace, or rename nodes. This extension provides a convenient way to make intelligent updates to XML documents, and XMLSpy has a unique implementation that makes it even easier. Let’s see how it works.

END_OF_DOCUMENT_TOKEN_TO_BE_REPLACED

“Having the ability to transform and publish data to multiple channels using an automated process helps users improve productivity and cut costs,” said Alexander Falk, President and CEO for Altova. The Altova Web site features a series of MapForce flash videos that each demonstrate a significant feature in 4 minutes or less. The Altova Online Training page offers three free MapForce self-paced training modules for Beginning, Intermediate, and Advanced data integration needs. Find out for yourself how convenient and cost-effective can be to solve your data conversion requirements. Click here to download a fully functional, free 30-day trial of Altova MapForce 2010!

We’ve recently updated our MapForce demo video to highlight the new functionality added in MapForce 2009, including XBRL mapping and HL7 mapping. Watch the short demo to see MapForce in action and learn about this new functionality. And if you’d like more detailed tutorials, check out Altova’s MapForce training course, which is free and available on demand. 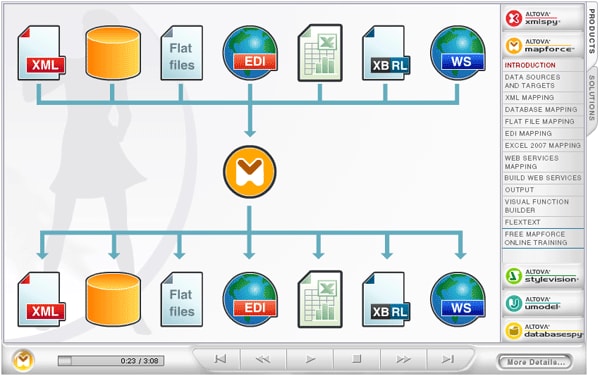 We’ve just launched the third video in the DatabaseSpy series. Exploring Databases is a tour of the DatabaseSpy Online Browser, a powerful tool for viewing, searching, and analyzing one or more connected databases. 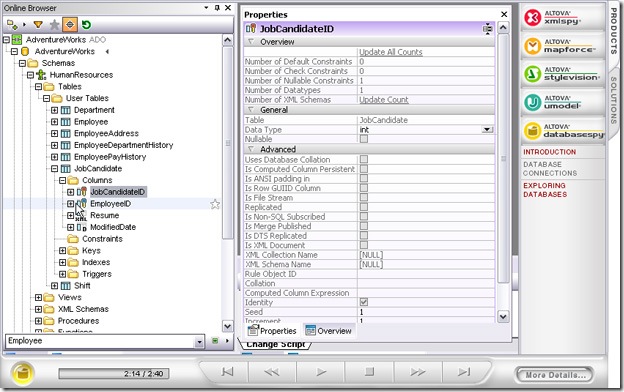 Exploring Databases builds on the preceding video, Database Connections, which demonstrated how easy it is to use DatabaseSpy to connect to one or more databases. You can even simultaneously connect to databases of different types. And DatabaseSpy supports the most popular databases in production today, including Microsoft SQL Server, IBM DB2, Oracle, Sybase, MySQL, and more. Once you’re connected, the DatabaseSpy Online Browser shows you an expandable hierarchy of the database structure. It’s a great place to start exploring an unfamiliar database or quickly navigate to any specific element you need to work with in a familiar one. The Altova Flash videos are proving to be a popular feature on our Web site, with close to 350,000 views in all. If you haven’t seen an Altova product video yet, you’re missing a great opportunity to get a flavor for components of the award-winning Altova MissionKit by seeing them in action. If you’re already a fan, check back again soon — we’re in the studio working on more videos right now.

We’re expanding our Flash video series to cover DatabaseSpy, Altova’s multi-purpose database utility. Available to view now, the first DatabaseSpy video is a two-minute introduction that quickly highlights many DatabaseSpy features and shows off its elegant and fun-to-use interface. 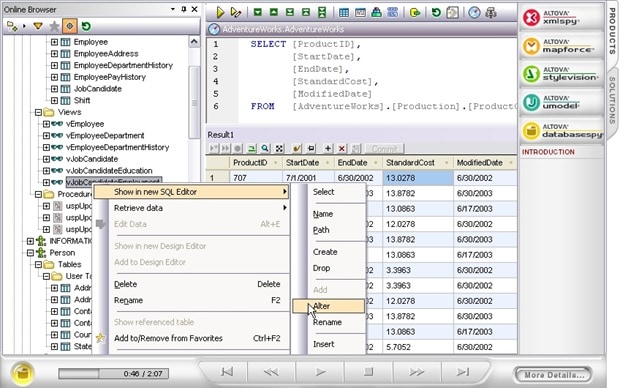 If you have ever wondered how a multi-database query and design tool can help with a range of database analysis, design, and editing tasks, check out this quick tour. You’ll get to see the DatabaseSpy Quick Connection Wizard, Database Browser, SQL Editor, data editing functionality, and the Graphical Design Editor that lets you visualize, create, or modify database tables and relationships without writing SQL commands. Find out for yourself why DatabaseSpy has received such high acclaim – and look for more Flash videos coming soon in the DatabaseSpy series!

The Altova team exhibited at Microsoft PDC (Professional Developers Conference) in Los Angeles a couple of weeks ago. PDC is billed as a tradeshow for “leading-edge developers and software architects,” and, true to its promise, this event delivered a crowd of high level technology professionals. We enjoying catching up with a large number of current Altova customers and other .NET developers interested in learning more about using Altova MissionKit tools to solve XML, UML, and database design and development challenges. Our visitors were particularly interested in MapForce, a powerful and VERY affordable alternative to large-scale ETL solutions like BizTalk and SSIS, and UModel, for its advanced UML support and integration with Visual Studio.We also took this opportunity to introduce visitors to the MissionKit and the huge savings offered through downloading it as an integrated development suite. The MissionKit was also a popular conversation topic because of the powerful plugins it offers for Visual Studio – in XMLSpy, MapForce, and UModel.One of the most enjoyable memories that this exhibitor has in particular from PDC is the large number of current customers who brought their friends by to encourage them to try our tools – telling them how they could solve problems that they had previously discussed and even answering questions from other visitors listening in! It really made me recognize and appreciate the enormous amount of support that Altova and Altova tools have from the .NET community… Thank you everyone. We hope that you continue to enjoy Altova MissionKit tools and to see you all again the next time PDC rolls into town!Lastly, here’s a video from the show: Allyson and David demoing UModel live at PDC.

The Altova team exhibited at Oracle OpenWorld 2008 in San Francisco last week. The exhibit halls were packed, and we were happy to have a steady stream of visitors to our booth. We had the pleasure of talking with many Altova customers as well as other Oracle users and developers interested in Altova XML, database, and UML tools. Of particular interest with this crowd were MapForce and DatabaseSpy, but we talked with lots of folks whose challenges – from publishing XML and database data, to UML modeling, to Web services testing – could be met with other tools across the Altova product line. We also had the opportunity to introduce many visitors to the Altova MissionKit, and people were happy to hear that they could get a full suite of tools and save some money at the same time. Here are a few videos chronicling our trip, including some on-the-spot product demos. The first is a 1-minute bird’s eye tour of downtown San Francisco and the Altova booth in the Moscone West exhibition hall.

Finally, this video includes a demo of DatabaseSpy, featuring how to use the Graphical Database Design editor to explore and modify database tables. Bonus Scene: take a ride on a San Francisco cable car!

These were shot live on the floor of the exhibition, as you’ll hear from the enthusiastic crowds in the background, and at other spots around town. Whether you attended the show this year or not, we hope you’ll enjoy our video postcards. Altova’s next exhibit will be at Microsoft PDC in Las Vegas – we hope to see you there!