The Altova Server Platform is comprised of the complete family of Altova’s high performance server software for automating data processing and data integration workflows. These cross-platform server software products allow for flexible installation either on premises or in any private or public cloud infrastructure.

END_OF_DOCUMENT_TOKEN_TO_BE_REPLACED

Cloud-first is becoming the new normal. At recent events we have frequently been asked about using Altova Server tools in the cloud. The answer is definitely, go for it. The installation is easy. In fact, we use Altova Server Software products ourselves for an internal reporting application, installed on local virtualized servers and on an AWS cloud instance. The charts below were generated by StyleVision Server running in the cloud to quickly communicate information about changes in dynamic data.

StyleVision Server is based on the built-in report and document generation engine developed for StyleVision and renders .SPS stylesheets originally designed in StyleVision, including features like a rich variety of charts to visually represent data.

In this post we will walk through the installation of FlowForce Server, MapForce Server, StyleVision Server, and RaptorXML Server for a complete data integration solution in the cloud.

END_OF_DOCUMENT_TOKEN_TO_BE_REPLACED

Techy folks generally have a good diff tool they rely on to compare and sync files and directories. But what happens when, as more and more info is bound for the cloud, your data lives on servers accessed via URL?

There are myriad applications today that live on servers accessed via HTPP – but let’s take a look at a common example: SVN. Subversion (SVN) repositories include WebDAV as a commonly used server option. WebDAV is a natural protocol for SVN because its concern is hierarchy, structured metadata, and versions. Since WebDAV is an extension of HTTP it gives easy access to basic information about files and folders to any HTTP-aware client, including DiffDog – Altova’s diff/merge tool for files, directories, and databases. However, DiffDog knows a few tricks that set it apart from the other breeds.

SVN clients typically support command line differencing; however, a text-only representation of the changes in even one file can be hard to read and use. When you want to compare the trunk against a tagged version, the problem is magnified.  There are several visual differencing tools available that can help with analyzing version changes in SVN. They have varying degrees of compatibility with how SVN works. Some tools are well integrated with the SVN command line. DiffDog includes all the common comparison options for a tool that is tightly integrated with SVN clients.  Where it excels is its ability to talk to SVN servers.  Accessing an SVN repository with DiffDog using WebDAV is simple. The easiest starting point is to open Directory Comparison View and paste in the URLs of the folders you want to compare. In this case we’re comparing SVN branches on Projectlocker.com. The two sets of files open, and DiffDog provides a color-coded, browsable view of the differences between the two directories. 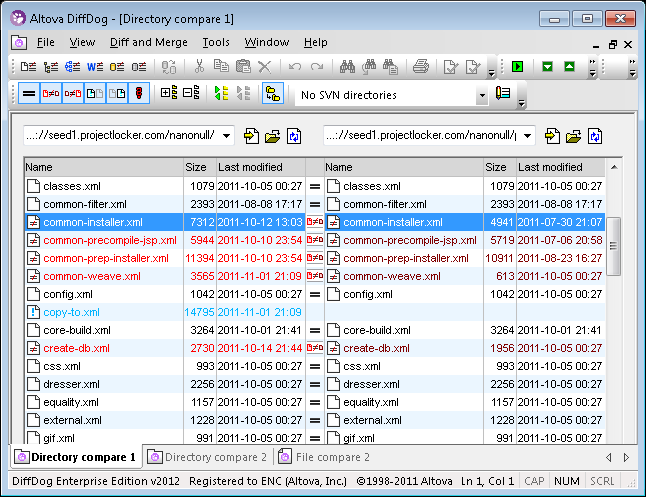 Clicking on either one of a pair of files opens a detailed file comparison. 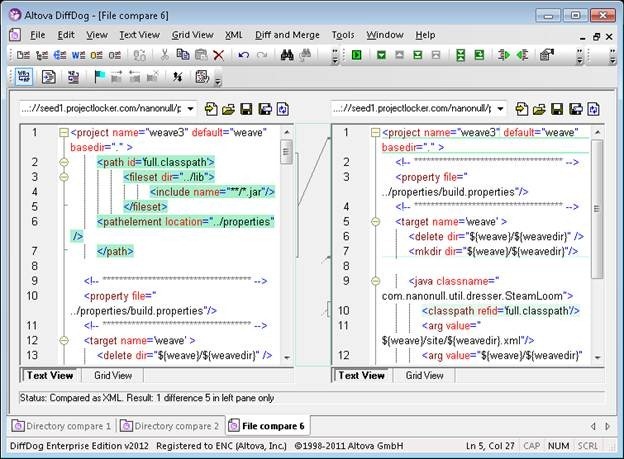 DiffDog’s ability to distinguish between changes to XML and meaningful changes is key in this situation – most development trees have some amount of XML in them.  DiffDog also supports comparing Word docs and databases – so all bases are covered.

Of course, folders you compare do not have to both be WebDAV SVN folders.  It is equally straightforward to compare the SVN server with a local directory. DiffDog’s ability to access servers via HTTP (or FTP) opens a world of possibilities: comparing a local directory with a Google Docs directory, or diffing a local Web server against files hosted on the Amazon CloudFront , or even just synching photos between your local drive and your chosen back- up service.   If you’d like to try DiffDog, it’s available for a 30-day trial over on the Altova Web site.