We’ve just completed a major redesign of the Altova Blog, moved to a modern blogging platform, cleaned up categories and tags, and implemented a responsive design that will adapt to whichever device you use when you visit the blog. 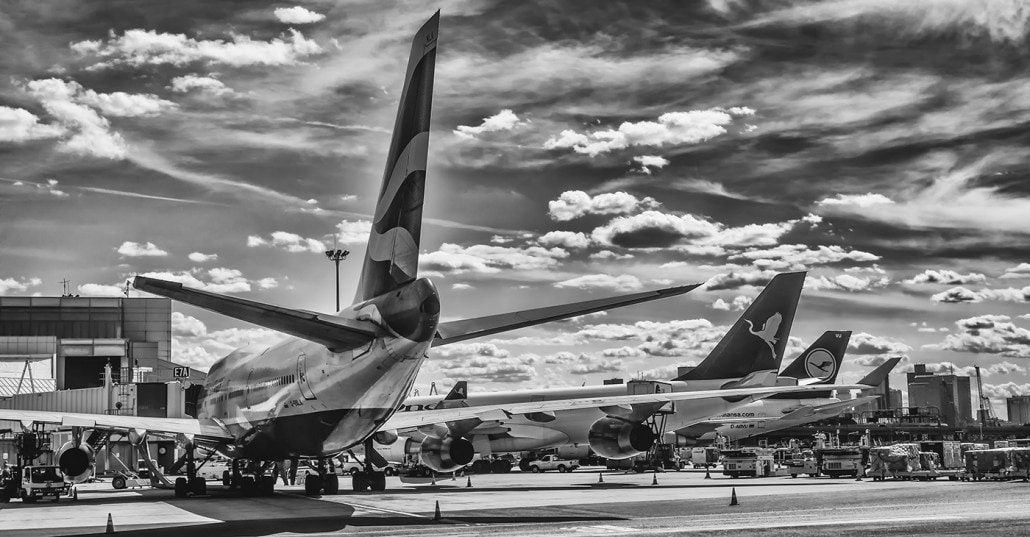 One of the great things about working with software developers is you not only get to create new things that never existed before, you also get to see how other peoples’ minds work when they discover alternate solutions to any design challenge. We received a comment from a software developer on our recent post titled Expandable If-Else Works like a Switch Statement in MapForce regarding one of the examples we used. The reader suggests that our second example illustrated a problem that would be more elegantly solved in Altova MapForce with Value-Map than by our Expanded If-Else statement. Here was the original example that received the month as a string of characters and needed to generate the corresponding number: 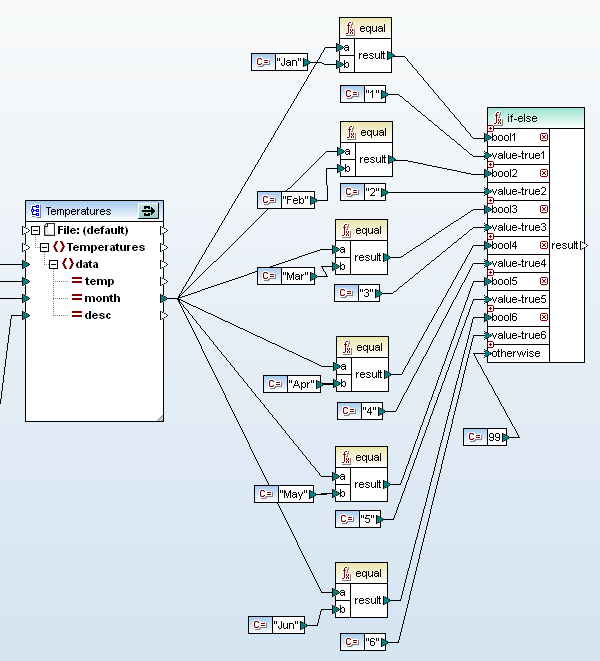 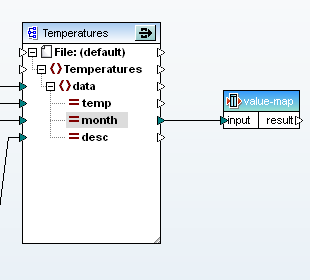 Yep, that’s it. Rather than copying, pasting, and modifying sets of elements the way we built our original Expanded If-Else, a Value-Map lets us easily create the entire look-up table in its Properties dialog: 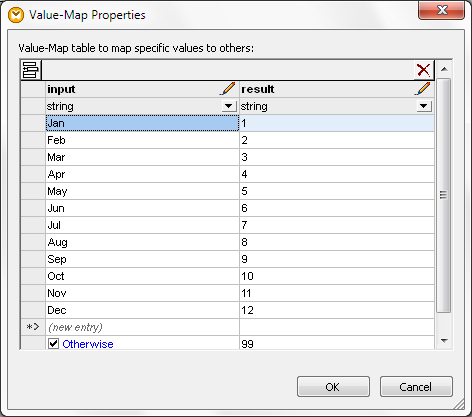 We accept the commenter’s point — Value-Map definitely works better for the problem we chose because it’s much quicker and easier to create! The table from the Value-Map properties is also more concise and easier to interpret in MapForce-generated mapping documentation than our original Expanded If-Else structure. Of course you can’t always replace an Expanded If-Else statement with a Value-Map. Data entering the Value-Map must equal a single value in the input table to generate a specific output, whereas Expanded If-Else lets you set up a series of conditions with different logical tests. Sometimes the exact nature of a data conversion project makes it a judgment call to use a switch element vs. a look-up table. Let’s say your project receives input as a number that represents a wavelength of the electromagnetic spectrum and you want to handle ultraviolet, visible colors, and infrared energy individually. In that case we could use an Expanded If-Else to test for ranges of input values. The Expanded If-Else section of the mapping might look like this: 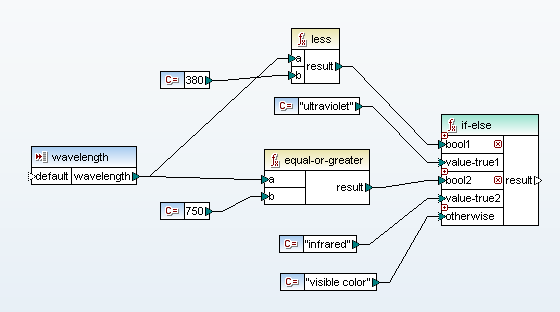 If the input is an integer, you could also create a solution using Value-Map, but you would need to build a very long look-up table. And then what happens later if the project requirements change and the input becomes a decimal number, or you need to filter each visible color separately by name? Essentially Altova MapForce is a really cool graphical representation of a complete software language toolbox that insulates you from detailed programming language syntax, with a rich collection of components you can assemble creatively to solve your own data mapping, conversion, and integration challenges. Find out for yourself how easy it is to apply MapForce to your own data mapping projects. Download a free 30-day trial of MapForce.

The industry is abuzz with the latest news announcing our release of the MissionKit Version 2011 Release 2. The release is loaded with new features for chart and report creation, enhanced data mapping capabilities, new XML Schema editing functionality, support for the latest version of BPMN, and a really cool new feature for comparing and merging Microsoft® Word documents.

Dr Dobb’s and SQL Server magazine are just a few of the industry publications and blogs that covered the launch.

Read what the industry is buzzing about and then download a free 30-day trial of the MissionKit and check out for yourself all the powerful new features now available in our suite of XML, database, and UML tools!

Welcome to the new, official Altova Blog, where you’ll find information on Altova announcements, new product features, and events – as well as useful reference material such as whitepapers, technical case studies, technology tips, and more. If you subscribed to either of Altova’s RSS feeds in the past, these have been replaced by the blog feed. Rest assured: you’ll still be receiving the same information – it will just be in a more fun, easily digestible format and updated more frequently. If you’re just joining us now, you can subscribe via your preferred reader in the right-hand sidebar. You’ll see that the Altova team has already been busy posting entries – check them out for a taste of what’s to come. We look forward to creating interesting posts and reading your comments!