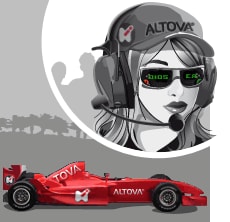 It’s time for another Altova product launch! Adding to the new functionality announced in February’s Release 2 of the Altova MissionKit 2010, Release 3 delivers integration with the recently available Visual Studio® 2010, support for working with NIEM and iXBRL standards, support for mapping data to/from SAP’s IDoc EDI format, and much more. Check out just a few of the highlights below and read all the details on the Altova What’s New page. Release 3 is a free update for all Altova customers with an active Support and Maintenance Package. You can also test drive a free trial that includes all these new features.

Multiple Altova tools have long supported seamless integration with Visual Studio, allowing you to use their complete feature set inside the VS environment to access advanced or specialized functionality not available within Visual Studio. These include :

With Release 3, this functionality has been updated to support Visual Studio 2010, which was released by Microsoft® last month. This adds to previous support for Visual Studio 2005 and 2008.

An oft-requested feature, extended schema validation allows you to validate naming and coding conventions outside the scope of the XML Schema standard. This gives you more control over your XML architecture by allowing you to further constrain the way that elements and attributes are created and defined. An example application of this powerful feature is within the National Information Exchange Model (NIEM), though it can be used for any set of rules defined by your organization or project.

Another feature implemented based on XMLSpy customer requests is user-defined sample values for XML instance generation. While previous versions of the XML editor supported generation of XML instances using data supplied by XMLSpy, with v2010r3 you can now specify your own sample data so that the generated files will contain arbitrary results selected from pre-supplied values. These new features are very important for users working with NIEM and other standards – and you’ll only find them in XMLSpy. If you happen to be working with NIEM, be sure to read how the Altova MissionKit provides end-to-end support for NIEM, from IEPD development and planning, to the implementation of an exchange.

Here are just a few other highlights from this most recent release across the Altova product line: Check out all the new R3 features and screenshots here, and see how the Altova MissionKit can turbo charge your next development or data integration project!