In Part 1 of this series we described how to connect Altova MapForce to the Groupon API. We queried the API for a list of Groupon divisions, then used the list to create API queries for all the current deals from every division. In this part, we will execute the /deals queries and filter the response for the most interesting data. The list of /deals queries we built previously looks like this:

To process all the queries, we can connect the list as a dynamic file input to a new mapping component. When we needed a new component last time, we dropped an API /divisions query into the mapping, and let MapForce create an XML Schema automatically. We could do the same thing here by dropping in an API /deals query as an XML input file. There’s just one small issue — although the Groupon API online documentation clearly describes the queries we can make, it is vague about the information that will be returned. Before we send dozens of queries to the API for all the current deals, we probably want to know a little more about the data that will come back.

Let’s Make a Deal Like Yogi Berra said, you can observe a lot just by looking. Let’s start by running a /deals query in XMLSpy. That will let us examine the response to a query for one division before we pull in a potentially unwieldy volume of data. The XMLSpy File / Open menu includes the same Switch to URL option we used in MapForce in the earlier post. If we enter the /deals API query for a division that covers a large metro area – say Dallas – we are likely to get enough deals instances to extrapolate the characteristics of the entire data set. XMLSpy opens the response to the /deals API query in Text view just as if we opened a local file: 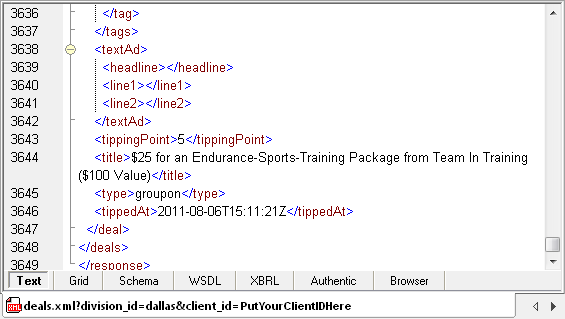 As expected, we got quite a bit of data when we requested all the deals for a single division! A fast way to analyze the structure of this data is to use the XMLSpy DTD / Schema menu option to generate an .xsd file from the xml. Shown below is a reduced view of the entire generated .xsd file based on the response to the /deals query for Dallas:

We can dig even deeper, following Yogi’s advice like déjà vu all over again. Expanding all the elements to review the XML Schema reveals some curious anomalies. For instance, there are two elements named redemptionLocation with different definitions. The first contains a sequence of child elements: 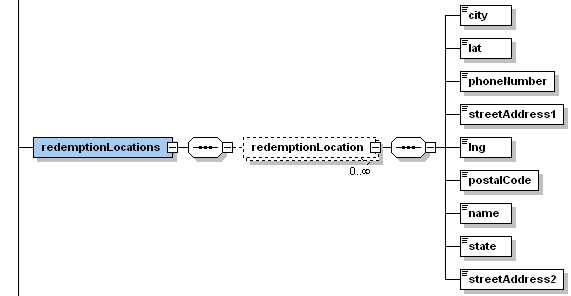 And the second is defined as a simple string: 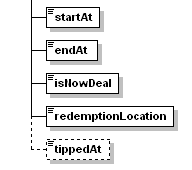 Going back into the xml data for Dallas and searching for redemptionLocation displays these examples:

Now this is really interesting, because redemptionLocation = ”online” identifies deals that can be redeemed from anywhere, instead of by a visit to a bricks and mortar location in the division where they are advertised. What if we ran the /deals API queries for all divisions and extracted a list of all the online deals? That would be one extreme Groupon! Only Ask for What You Need The Groupon /deals API query supports an optional parameter called &show= that allows users to limit the data returned. Applying this parameter can save bandwidth and reduce processing time for the data transformation by removing unwanted data from the API response. We can also simplify our final result by including only the most interesting information, including the link to the Groupon web page for each deal. After we remove unwanted elements from the generated Dallas schema, our final version for the summary of online deals looks like this: 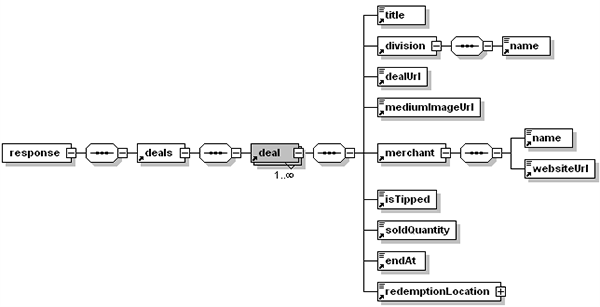 When we add the &show= parameter to our MapForce mapping to request only the elements included in the simplified XML Schema, the queries look like this:

Now we can drop the revised .xsd file into the mapping and connect the list of API /deals queries as dynamic input. We don’t need to delete the text file we used to collect the list of queries — that might continue to be helpful for future debugging. 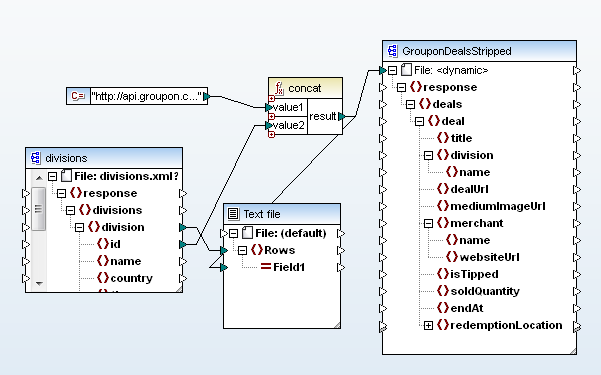 These changes complete the input side of the data mapping. Defining the Data Transformation Output Back in XMLSpy we can make a couple more revisions to the input XML Schema to design a new version for output: 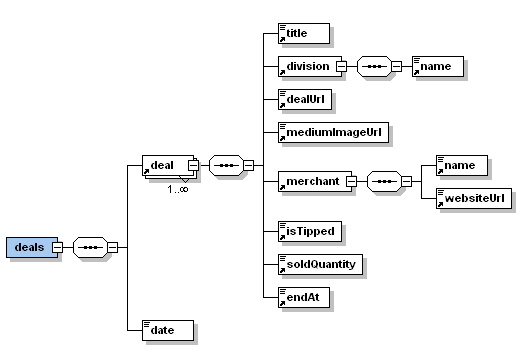 We discarded the response element since it doesn’t add any value, and eliminated the redemptionLocation element that we don’t intend to include in the output. We also added a date element for a timestamp, because our output file will be a snapshot of data that is constantly changing. After saving this version of the .xsd file in XMLSpy, we can drop it into the MapForce mapping. Shown below is the output side of the mapping with the output component partially connected. The filter at the top reads the redemptionLocation element to select only online deals and the now function inserts the date: 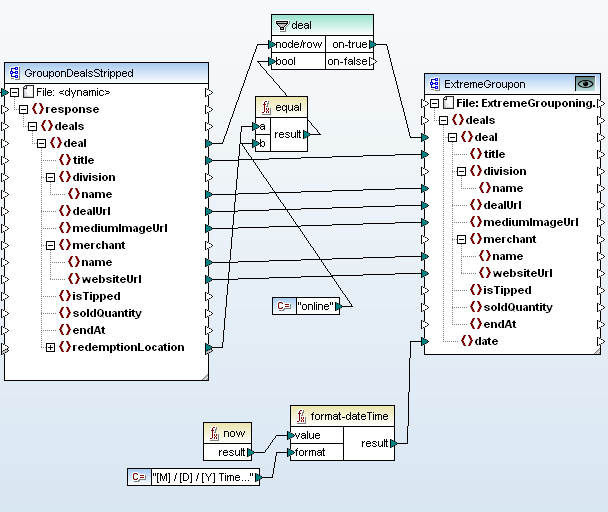 The last revision we made in the output XML Schema was to change several element types from dateTime, Boolean, and integer to the string data type to allow more descriptive text Here is the complete definition of the mapping with the final connections to the output component: 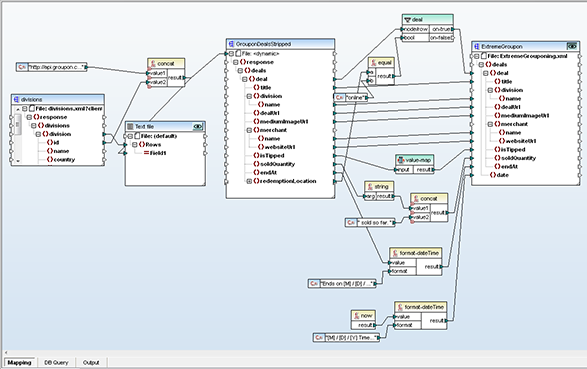 Now for the Payoff When we click the Output button MapForce processes the entire mapping from beginning to end using the MapForce Built-in execution engine. Here’s a breakdown of the steps:

MapForce takes only a few seconds to complete all those steps and generate an output file with a series of deals that look like this: 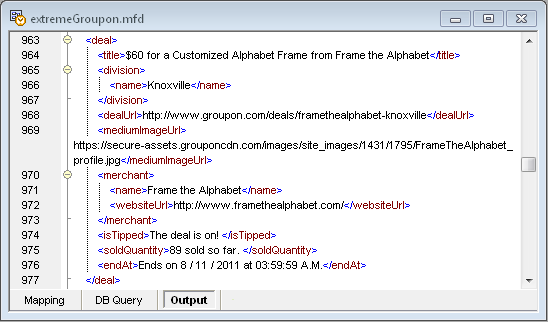 In part 3 of this series we’ll design a stylesheet to automatically transform the XML output of our mapping into html for attractive presentation in a web browser and on mobile devices. See ya at the ballpark, Yogi! XMLSpy and MapForce are available together in the specially priced Altova MissionKit. See for yourself how easy it is to use the MissionKit to convert data from a Web API — download a free 30-day trial!
Editor’s Note: Our original series on mapping data from the Groupon API ran in three parts you can see by clicking the links here: Part 1 of Processing the Groupon API with Altova MapForce describes how to create dynamic input by collecting data from multiple URLs. Processing the Groupon API with MapForce – Part 2 describes how we filtered data from the API and defined the output to extract only the most interesting details. Processing the Groupon API – Part 3 describes formatting the output as a single HTML document optimized for desktop and mobile devices, and reviews ways to automate repeat execution.

The PXF File as the Software Equivalent of Plug and Play – A Database Editing...Processing the Groupon API – Part 3