The latest version of MobileTogether is available today, adding even more functionality to this game-changing framework for building and deploying native mobile apps faster than any other solution.

To start with, we’ve completely revised the pricing for MobileTogether, with a new model that’s simple to understand and ridiculously affordable.

Let’s take a look at how these new features combine to let you build the most sophisticated data-centric apps for iOS, Android, and Windows devices.

MobileTogether has broken most of the barriers to mobile development, making it easier and faster than ever before to develop great apps for all platforms. Now, we’re breaking down the final roadblock: cost. With the MobileTogether 2.1 launch, we’re rolling out a simplified pricing plan designed to get you up and running at light speed.

While there’s no limit to the number of users or number of apps that you can run on the mobile app server, you may, of course need to scale the server machine depending on actual load, to provide optimal performance for larger numbers of users. But the starting price is perfect for most initial deployments.

With this radically reduced pricing structure, and the new features described below, we’ve aimed to make MobileTogether the most accessible – and most sophisticated – framework for developing data-centric apps for all platforms.

Enhancements to Tables in MobileTogether 2.1

Tables are a fundamental element of any mobile app, and MobileTogether includes powerful enhancements for building tables of any size:

Support for scrollable tables provides even more flexibility for table creation in MobileTogether. Now, to ensure easy display on devices of all sizes, developers can set the maximum visible size of a table, or set it to fit the rest of the screen, with horizontal or vertical scrolling enabled to view the rest. 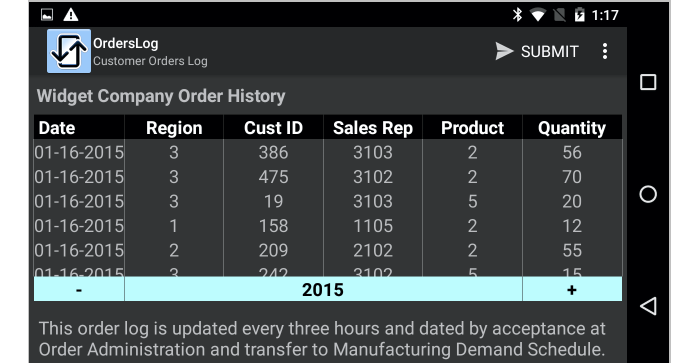 Scrollable tables can be used for more than expanded displays of data, for instance, when a table is used to layout other controls. The scrollable table feature makes it possible to define elements such as navigation bars or other tools that always stay locked at the bottom of the screen as the user scrolls through a larger view.

New controls in MobileTogether 2.1 allow developers to add familiar visual elements to their sophisticated UIs, making apps even easier for users to understand and operate:

An example of the new horizontal slider control is shown in the app below.

The new actions included in MobileTogether 2.1 round out the sophisticated Action Tree programming language pioneered by MobileTogether, making this platform powerful enough to build any data centric app imaginable. They include:

Extensive error handling capabilities are enabled with the new Try/Catch (shown in the Action Tree below), Cancel Action Execution, and related actions. In addition, the ability to pass parameters and return results in action groups lets action groups perform like true programming subroutines.

New XPath extension functions help you allow for various scenarios, such as whether the device is connected via Wi-Fi or not, and what the standard font height is on a particular client platform. The option to hide the page title bar gives the app a larger active area, which can be especially helpful on smaller devices.

A great user experience is the first goal of any data-centric app, and we’re constantly striving to add features aimed directly at helping the end user. New in MobileTogether 2.1:

Now, even when a connection is slow, MobileTogether apps will start much faster. Developers can also specify a more user-friendly introductory page when an app is accessed via the browser-based client.

MyCollections is a highly flexible and expandable mobile database app for managing your personal collections. MyCollections includes built-in templates for audio CDs, books, and wine that can be used as-is, customized with new enhancements, or viewed as merely a starting point for any other collection. You can add photos, create and format new descriptive fields, and customize My Collections to suit the particulars of your keepsakes. You can even share your collections with friends.

My Collections was built with the MobileTogether mobile development framework and demonstrates many of the new features available in MobileTogether 2.1. 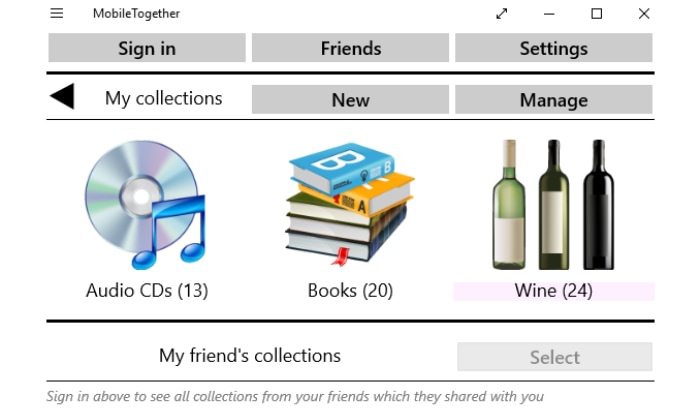 Read more about these new features, or update your MobileTogether software for free now.

If you’re not already a customer, get started with the free MobileTogether Designer!