The latest release of Altova’s mobile app development framework introduces over 18 features with highlights including support for NFC messages, text-to-speech, the ability to read device contacts, flexible options for dynamic tables, and more.

Read more below or check out our quick MobileTogether 3.2 video.

Building sophisticated, data-centric apps in MobileTogether is easier than ever with a growing list of actions developers can utilize to power their apps. Adding a new action is as easy as dragging it to an Action Tree and defining any necessary parameters. 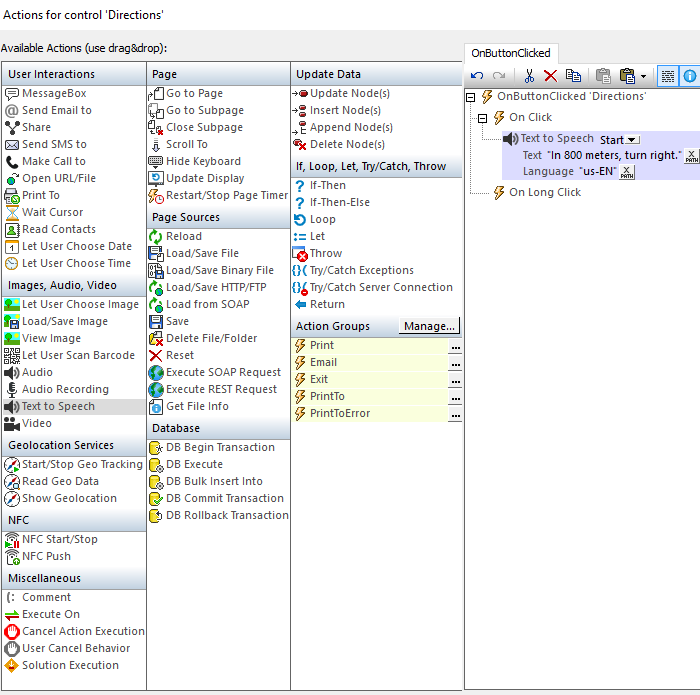 In this latest release, we’ve made it possible for your apps to access device contacts, for instance to easily send an SMS or email from your app, as well as read text aloud to users via text-to-speech functionality.

New actions in MobileTogether 3.2 include:

In addition to the new actions above, some of the existing actions have been enhanced with more options and flexibility. Updates include:

The ability to specify a reply-to email for emails automatically sent from your MobileTogether Server has been requested by several customers.  This way, if the recipient of the email replies to the message, the reply can be directed somewhere other than to the server that sent it. An example is shown below in the definition of the Send Email action.

Data centric apps often require the use of tables to represent various types of data. New features add even more power and flexibility to table creation by allowing developers to specify tables with dynamic columns. This way, a table can grow dynamically from left to right depending on the number of instances of an element in the data.

Shown below is the definition of a table with a dynamic Person column, and the resulting scrollable table:

On-demand loading of tables lets you load large scrollable tables in a fraction of the time. You simply specify the number of table rows – known as a chunk – that can be loaded at a time. As the user scrolls to the bottom of the first chunk, the next chunk is loaded. This is seamless to the user but greatly increases performance.

Learn more about these features on our what’s new page and video.