v2016r2 introduces over 20 new features and updates to the Altova product line – but that’s a lot to cover in one blog post. Let’s take a look at the top five that are sure to blow your socks off.

Writing and testing XPath and XQuery statements is often a game of trial and error, constantly tweaking each expression until it selects or returns the data exactly as you intended. The ability to test as you’re working, with interactive entry helpers and instant results helps speed the process greatly. That’s exactly what the XPath/XQuery window in XMLSpy is designed to do – and it just got even better with the addition of the first-of-its-kind XPath and XQuery Debugger. 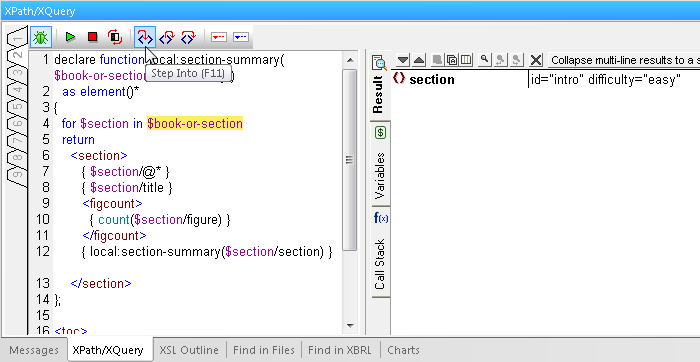 This new window lets you analyze the results of your XPath or XQuery step-by-step as you run it against an XML document, with all the features developers expect from a full-featured code debugger, including step into, step over, and step out functionality, as well as Result, Variables, and Call Stack tabs. It’s easy to set break points and trace points to halt the debugger so you can examine the results at a particular point.

The debugger makes it easy to test and perfect your XQuery and XPath in the same window where you’re editing it, saving developers time and frustration.

When we added the graphical JSON Schema editor to XMLSpy earlier this year, we knew users would love it. We also knew they’d expect the very same functionality available for working with XSD applied to JSON Schema development – and we’ve rounded out that support in this release. XMLSpy now provides additional functionality to speed JSON development:

This new functionality completes comprehensive JSON support in XMLSpy, which now includes intelligent instance editing and validation, as well as JSON Schema editing, generation, conversion, and documentation – all in the same environment where you’re working with XML and related technologies.

Adding to the long list of data formats available for any-to-any data mapping  and integration in MapForce is new support for REST Web services.

MapForce accepts XML or JSON as the Web service response, and allows definition of parameters and supports custom HTTP headers, when required. Users can either define the Web service interface manually or by importing settings from a WADL file or a URL.

This new, often-requested support for REST Web services as data functions within a mapping allows users to more easily integrate information available from a wide range of sources over the Internet.

StyleVision makes it easy to build elegant reports and forms for publishing XML, XBRL, and database data in web and print formats. Now, it’s even easier to get started on a new design by basing your report or form on an existing Word document.

Compared to starting from scratch, basing a designs on an existing Word doc can save hours – or even days for complex projects – of design time otherwise spent replicating existing documents, since StyleVision preserves all the existing formatting and layout properties that exist in the Word doc.

Once the Word file is loaded, you can optionally add additional XML, database, or XBRL data sources to produce dynamic, multichannel output. It’s a great way to add value to existing forms or simply get a jumpstart creating a sophisticated StyleVision design.

The .NET API allows developers to integrate RaptorXML Server functionality for high-performance XML, JSON, or XBRL validation and processing in applications written for the Microsoft platform, in C# and other .NET languages.

The potential applications for this synergy are limitless: developers can now integrate RaptorXML functionality into any application for the Microsoft platform. For instance, the .NET API makes it possible to build Excel plugins to generate XBRL directly from data in Excel, offering a powerful alternative to existing tagging-based solutions that could revolutionize the generation of XBRL data.

You can upgrade or get more information on these new features – and the numerous others introduced in v2016r2 – on the Altova What’s New page.