Altova DiffDog was originally launched in 2005 as a diff/merge tool with XML-aware functionality to help users identify differences between XML files. It even identifies files that are XML-equivalent but appear different in a text comparison because of spacing, line-ending, or attribute order variations. 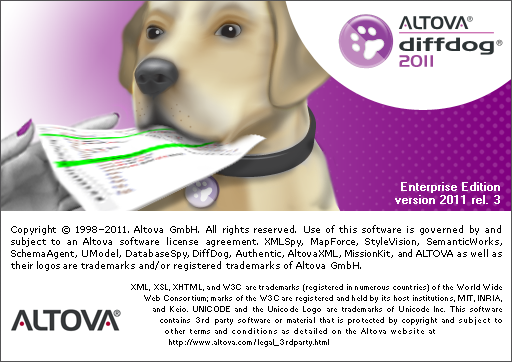 DiffDog has continually improved over time with many new features including:

DiffDog 2011 Release 3 adds a new simplified directory sync feature to its robust folder diff/merge functionality. The Synchronize Directories dialog now includes a button at the top to select a complete directory sync in a single step.

The Fully Synchronize feature produces an exact copy of the source directory, even if the target has newer versions of some files, and deletes files from the target that don’t exist on the source, making this choice a quick tool to backup complex directories containing many files and sub-folders. DiffDog provides a summary of all actions to be taken before any files are copied or deleted: 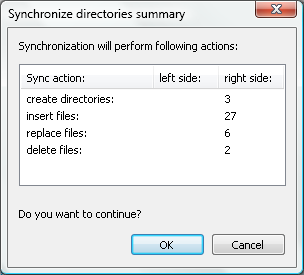 If you want to prevent a file being overwritten or deleted from the target directory, you can click Cancel, and then use the Manual Override feature to ignore or reverse the copy direction for any file pair.

Pretty good trick for an app that’s older than 42 in dog years*, isn’t it? Find out for yourself how DiffDog can faithfully synchronize your directories – download a fully-functional, free 30-day trial! * Popular myth suggests that one calendar year for a software developer is equivalent to 7 years in the life of a dog. For a more complete discussion of canine lifespan, see the Wikipedia article titled Aging in Dogs.