EDI (Electronic Data Interchange) standards allow participants with different roles in an industry to communicate clearly and rapidly, and date back to the earliest implementations of electronic communication in the 1950s, long before modern business technologies such as ERP, CRM, and many others. Yet even today, EDI standards continue to evolve to support new requirements and opportunities.

MapForce has long supported data mapping to and from ANSI X12, UN/EDIFACT and other popular EDI standards, and now in the latest release adds support for data mapping NCPDP SCRIPT.

SCRIPT is the state of the art EDI standard developed by the National Council for Prescription Drug Programs (NCPDP) for electronically transmitting medical prescriptions, also known as ePrescribing (eRX) in the United States.

Since EDI is an intended as a data interchange standard, entities such as pharma manufacturers, pharmacies, drug prescribers, and insurances companies require data mapping tools to generate and interpret NCPDP SCRIPT messages. MapForce is a graphical EDI mapping tool with native support for all major business data formats in use today, including XML, databases, flat files, Excel, and Web services.

A user creates a data mapping once between internal data formats and EDI standard such as NCPDP SCRIPT, and the mappings can later be executed automatically on demand as a MapForce Server execution file or via generation of royalty-free source code.

NCPDP SCRIPT can use either the UN/EDIFACT format or an XML format. If the user has the NCPDP XML Schemas, MapForce will support mapping data to or from SCRIPT using the standard XML mapping commands and validation.

To map to or from the UN/EDIFACT format, a user simply inserts an EDI file into the data mapping using either the MapForce Insert menu or the toolbar icon. This opens a dialog that offers all SCRIPT messages for mapping: 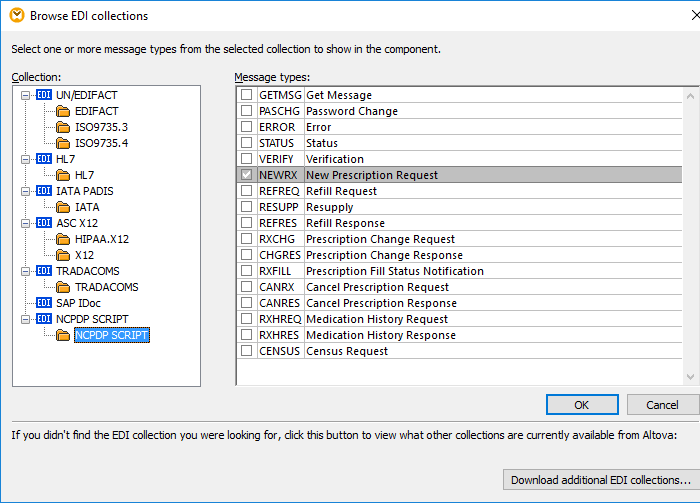 The selected message is added to the data mapping, where it may be mapped as either a source or destination component. In the image below, the patient segment of the New Prescription Request is expanded to display detailed message elements that identify the patient. 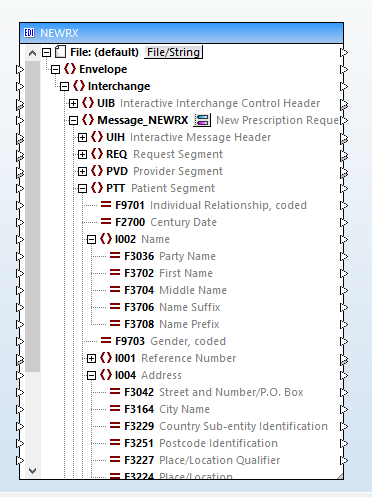 Heath Level 7 International (HL7), the standards organization has published guidelines for mapping from HL7 formats to NCPDP SCRIPT. The partial view below shows a mapping of a new prescription request from HL7 to NCPDP SCRIPT:

The output of the mapping is an NCPDP SCRIPT new prescription request in UN/EDIFACT format:

The addition of support for NCPDP SCRIPT makes MapForce the ideal data integration and conversion platform for the health-care industry,  allowing easy integration between NCPDP SCRIPT EDI, XML, HL7, and any in-house data sources or targets. Download a free trial of MapForce to check it out for yourself!