Smartphones and tablets are everywhere, and superior apps have created a population of demanding users with high standards for mobile performance. This can be challenge for enterprises that want to build mobile apps to support internal business goals.

Complicating development tasks, many companies have adopted BYOD (Bring Your Own Device) policies that give users choice and flexibility while off-loading mobile device procurement issues. However, BYOD scenarios present significant hurdles for developers, who now must build apps for multiple mobile operating systems and screen sizes.

Enterprise developers in this environment need a tool that lets them quickly deliver a new mobile app or an updated version. Altova MobileTogether is that tool. MobileTogether lets developers design, test, and release one version of an app to run on all mobile devices, with interface features that will delight users across platforms.

Further, MobileTogether makes it simple to build sophisticated apps that connect to your existing backend systems and all popular relational databases. The MobileTogether framework includes the backend server for the mobile app, so developers create the front-end app and the back-end server logic at the same time and in one environment!

A common enterprise requirement is a mobile app that displays a real-time sales report  for executives. For a manufacturing company, the app might need to combine sales by day and month for multiple products and regions, allow the user to zoom in by product and region, or view results in unit volume or dollars.

Here is just such a mobile reporting app built with MobileTogether, as seen on an Android phone that might belong to the company CEO: 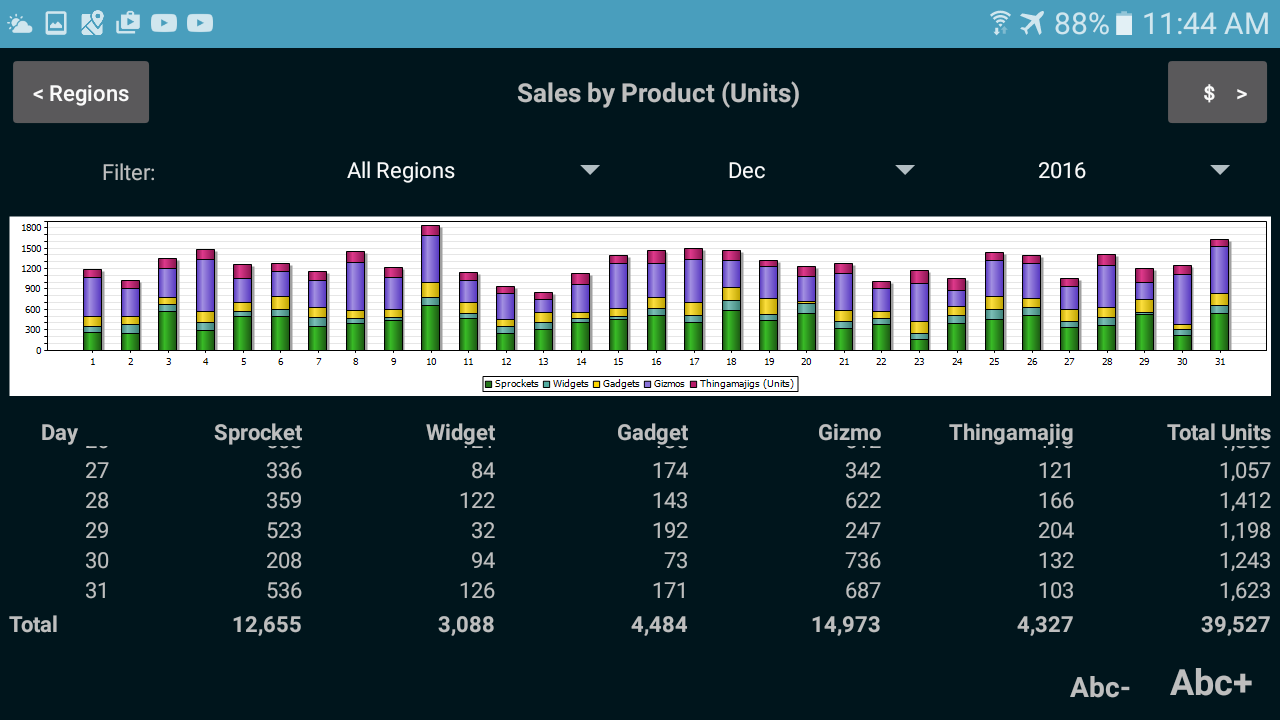 Buttons at the left and right of the top row switch to the Regions report or display sales in dollars instead of units. Controls on the second row let the user select a report for a different month, or select the report for a single region from a drop-down menu: 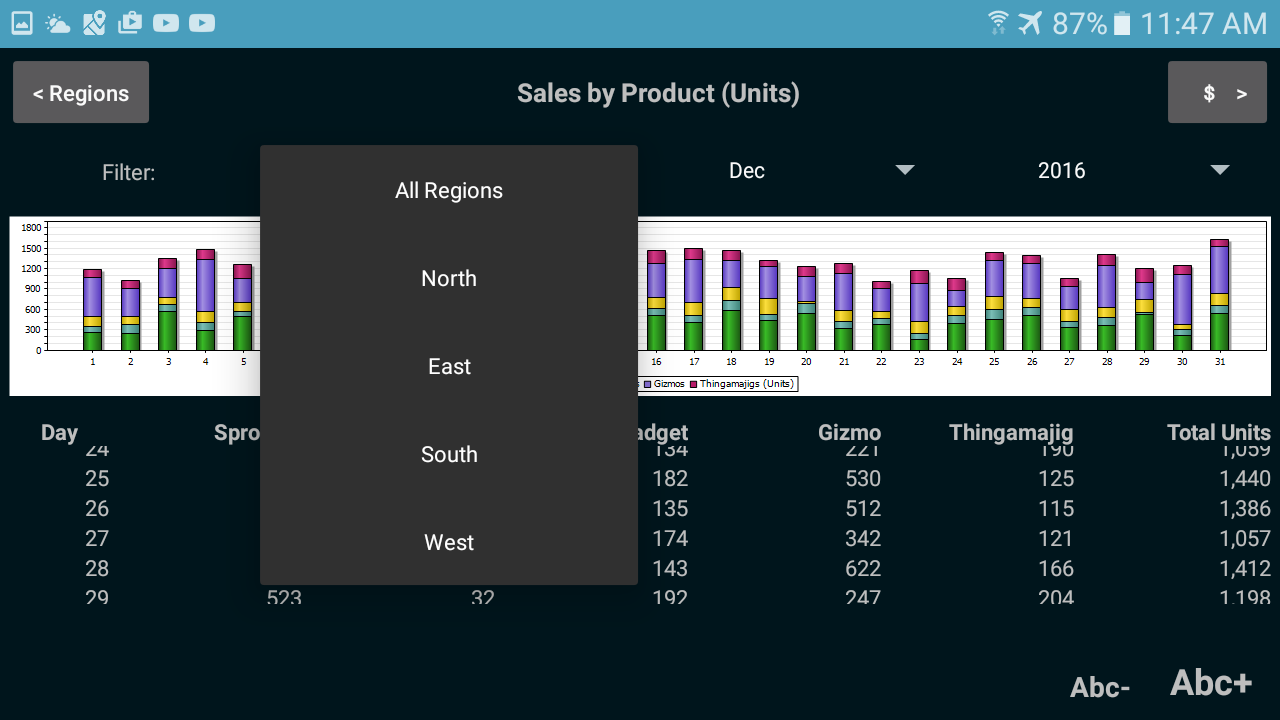 For our fictional company with 5 products, 4 regions, views in units or dollars for each report, and both portrait and landscape orientations, the mobile sales report app generates a total of 44 unique reports for any single month. Numbers in the data table are retrieved in real-time from the company sales database and the stacked bar chart is generated on the fly. The mobile app developer chose different colors for the chart in the regions report, as seen here on an iPhone that belongs to the VP of Sales: 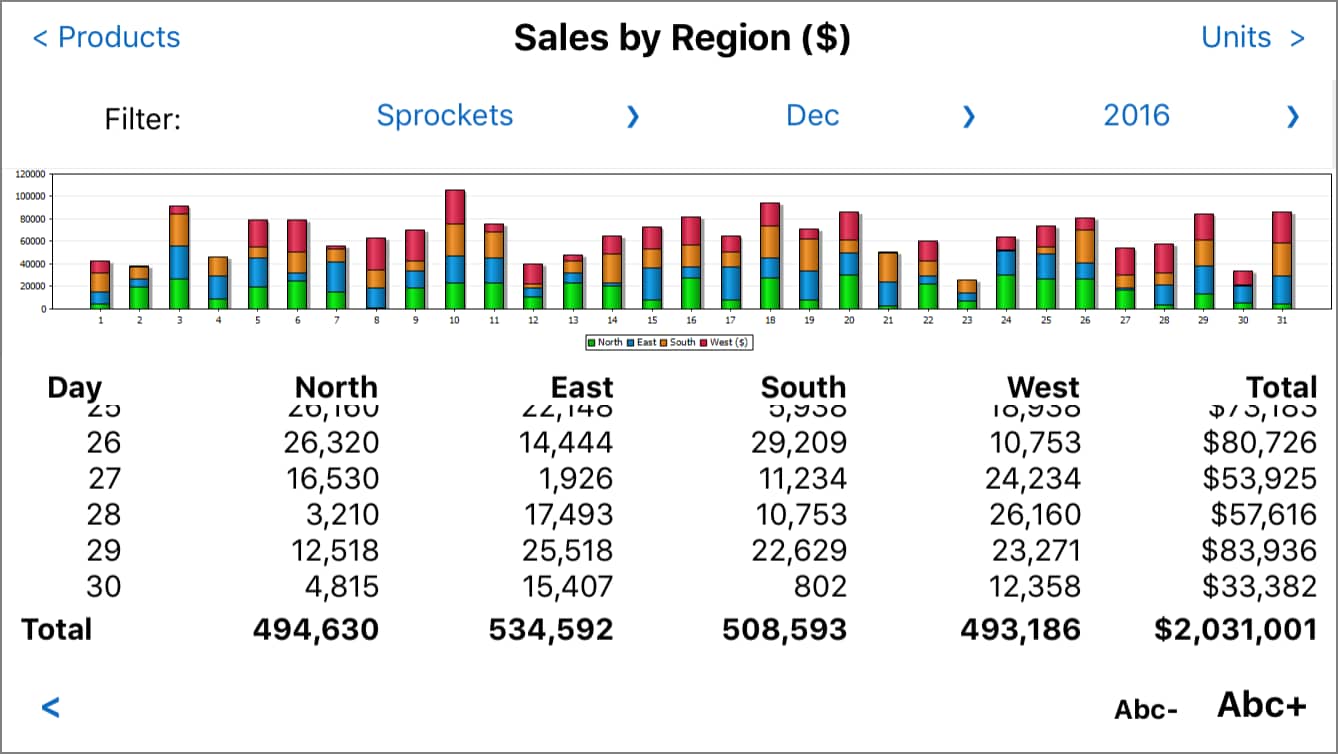 On all platforms, the data table in the center can be scrolled vertically by the user. The chart at the top and the Total line below the table are always visible, and the user can easily examine data for any day.

The Abc controls at the lower right let the end user customize the text size for any device. The user’s selection is saved as persistent data that is restored next time the app runs.

And by the way, when any user holds his phone in portrait orientation, both the chart and data table automatically resize to fill the screen.

A single design created in the MobileTogether Designer can be deployed to any platform:

This means when a busy executive is back in the office using a desktop computer, the same sales report is available as a Windows 10 app: 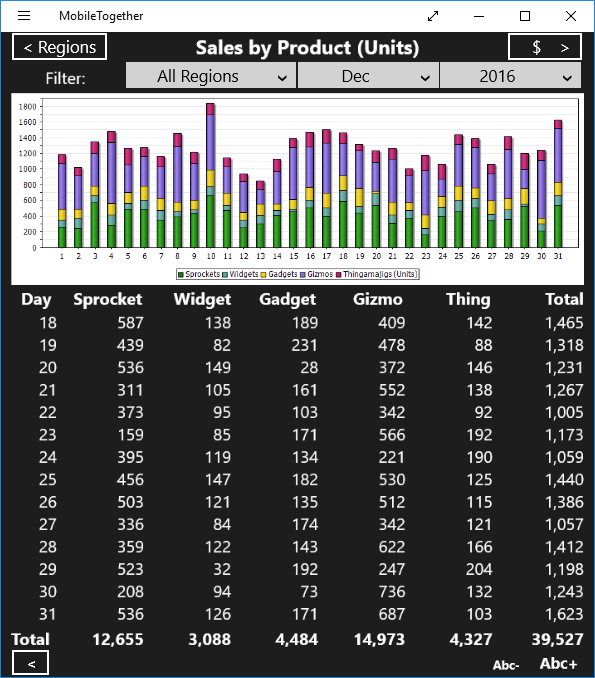 The developer chose stacked bar charts to represent sales data for this app. Other chart types and styles are more appropriate for other types of data, so MobileTogether also supports pie charts, line charts, area charts, gauge charts, and candlestick charts, many in 2-d and 3-d configurations. Developers can even specify background images and chart overlays to create highly customized images to represent the data at hand. 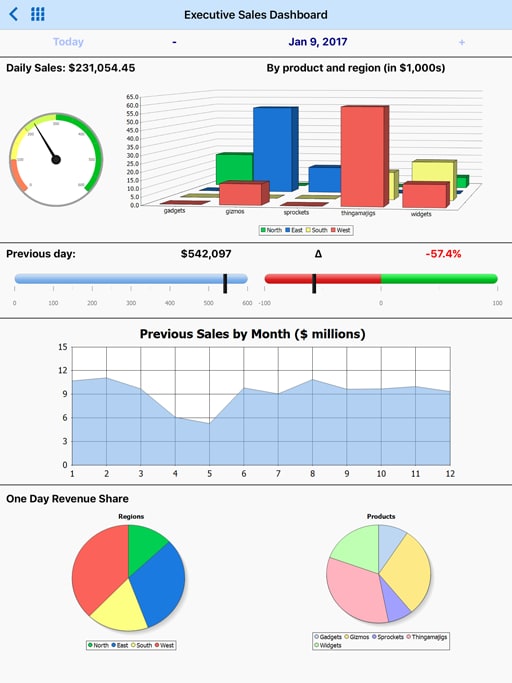 Each chart in the dashboard app can be linked to sup-pages that provide greater detail. For instance, our simple sales report app adds detail to the 3-d bar chart and pie charts shown in the mobile dashboard app above.

Elegant data reports or dashboards are just one type of mobile app you can build from a single design. MobileTogether includes sophisticated control-flow and business logic processing and access to mobile device features like GPS, camera, images, video, sounds, text messaging, and more.

Get started creating your own cross-platform enterprise mobile apps! The MobileTogether Designer is free to download and use.