Sound effects are common in mobile apps and serve as auditory confirmation that an action has been performed. For instance, in a sales dashboard app with alternate reports by region or product, we might want to add a sound effect when switching between views. The two main views of a sales by day dashboard are shown above. The user toggles between views by tapping the navigation button at the top left. To add a sound effect to the button, we create an Action Group in the MobileTogether Designer: The original sound comes from an audio file that can be specified as a file name or URL. We also specified that the sound will play from the start of the file, and its duration will be 1 second.

We optionally provided the name of a cache file of the end user device. When the action group is executed, the mobile device first looks for the local cache file. The file is only downloaded from the MobileTogether Server if the cache file does not exist. By the way, the audio action can do more than just play a sound file:

You could even combine a collection of sounds in a single file and use the Audio Seek to action to select any individual effect.

Now we can assign the action group to the main navigation button of our dashboard app:

We can add the same action group to the control actions for the buttons at the top right of our app that switch the reports between units and dollars. 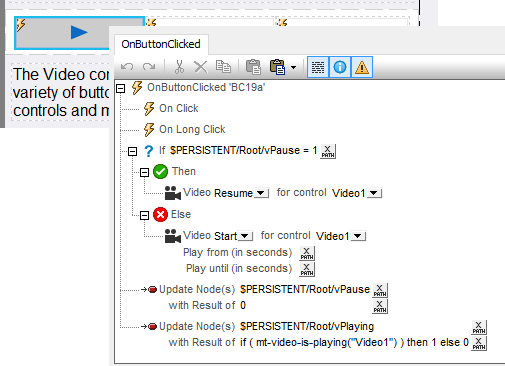 You can apply various forms of the video action to create all the play, pause, rewind and other video buttons users expect. But programming the buttons yourself is optional – you can choose default controls that overlay the video frame:

MobileTogether also includes an audio action to let developers embed sound recording into a larger app. For instance, an app for insurance claims adjusters can display information about a claim, then allow the adjuster to take a picture and dictate a commentary to be associated with the case. The MobileTogether sound recording action lets the developer specify the audio file format (encoding) and sampling rate, which determine the quality of the recording, or to limit the duration or recorded file size.

Download the free MobileTogether Designer to add audio and video to your own cross-platform mobile apps in record time!

Multimedia for MobileTop Five Reasons to Document Your Schemas